The present land area that comprises Kennett Township was originally part of a 30,000 acre tract conveyed by William Penn to his children, William Jr. and Letitia. The tract known as Stenning Manor, surveyed by Henry Hollingsworth in 1701, included the land within the present boundaries of Kennett Square Borough, the Townships of New Garden, Pennsbury, and Pocopson, and several thousand acres in present day New Castle County, DE.

It is difficult to say who the first white settlers in the Township might have been, but it is known the Lenape Indians are native to the area. Indian Hannah, who has been called the "last of the Lenni-Lenapes," was born just north of the junction of U.S. Route 1 and PA Route 52. She lived and worked among the white settlers of the community and died in 1803. Although she is buried near Embreeville, a marker is on the grounds of the Chester County Tourist and Convention Bureau at Longwood.

One of the early settlers within the original limits of the Township is reported to have been Francis Smith, who acquired two hundred acres at the mouth of the Pocopson Creek in 1686. The Township name is said to have been suggested by Smith as a tribute to his home village, Kennett, in the County of Wiltshire, England. 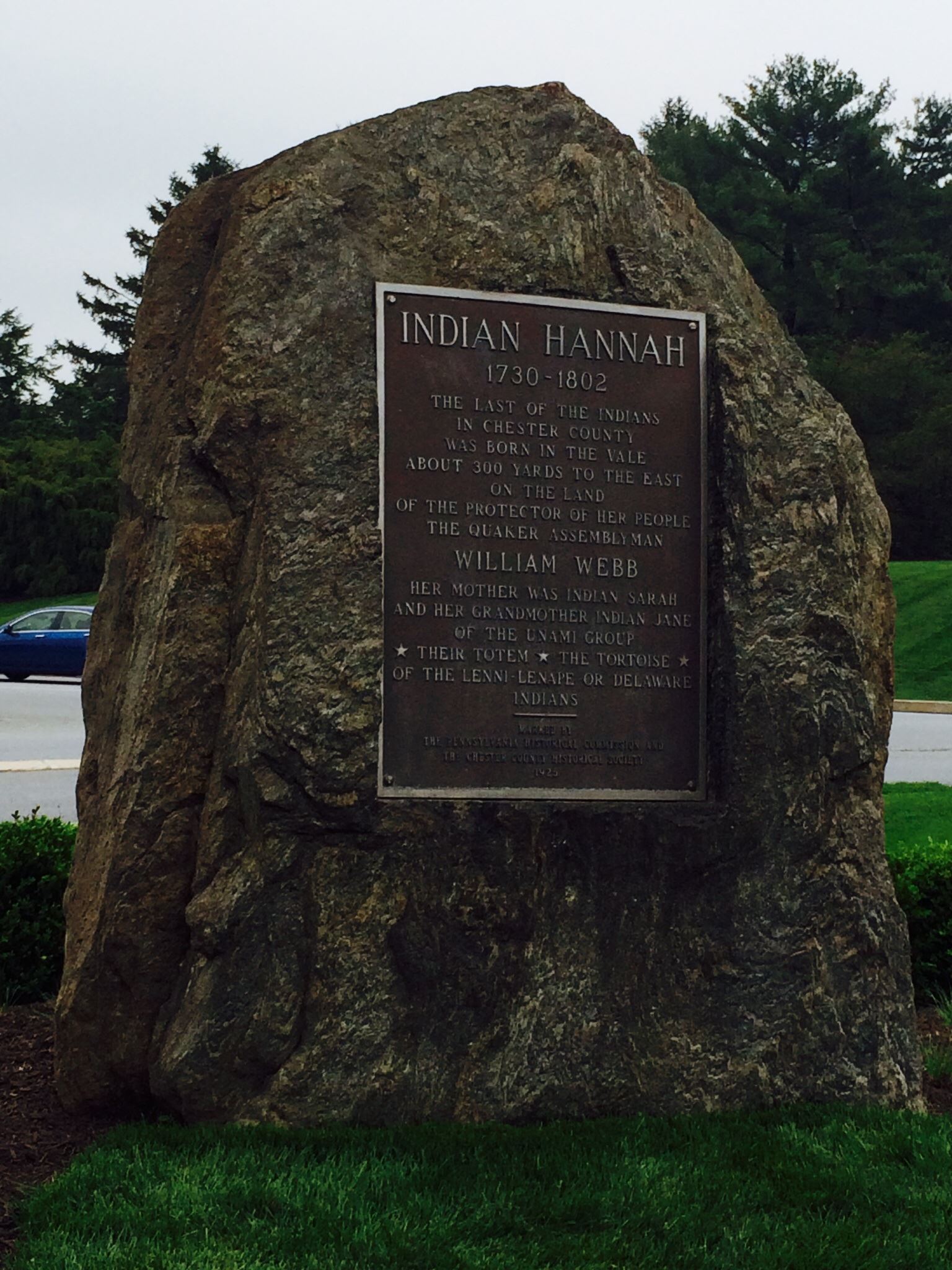 
The Borough of Kennett Square was formed from the Township and incorporated in 1855. The original village in the Township served as the nucleus of the Borough. The Borough itself comprised a little over one square mile of land and included 606 inhabitants at the time of its formation.


Kennett Township figured prominently in our nation's military history. During the Revolution, British soldiers and Hessian mercenaries passed through on their way to Chadds Ford. Records indicate that preliminary skirmishes of the Battle of the Brandywine took place at the Anvil at Hamorton and near Old Kennett Meetinghouse. Most of the early settlers in the area were English Quakers, who were inclined to support neither the British nor the American side, since, by tradition, they were opposed to war and the taking of oaths.


During the War of 1812, an encampment of 3,000 soldiers under the command of General Bloomfield drilled on the site of the present Kennett Square Borough Waterworks. He gave his name to the property which supported a series of early mills in the Township and was owned by the Chambers family for over a century.


Prior to the Civil War, many of the Quakers in Kennett Township were active in the "Underground Railroad," which aided runaway slaves in their efforts to escape to Canada. Using railroad terminology, the persons transporting the runaways from one place to another were called "conductors" and the homes where they were concealed were known as "stations." Well-known conductors in the area were John and Hannah Cox, whose home was located near the Anvil. Dinah and Isaac Mendenhall secreted untold numbers of slaves in their home along the road now known as Route 52. Another prominent conductor, Dr. Bartholomew Fussell, lived a mile east of Kennett Square in a large home later owned by Mr. and Mrs. Frank Way and known as "The Pines." Many old farmhouses in the area had secret hideaways where slaves were said to have been concealed by day and moved to the next station under the cover of night.


Free blacks were also very active in aiding runaway slaves on the road to freedom and were an important segment of Kennett Township's population as early as 1830. Among the early black settlers appear the names of Matthews, Ray, Jones, Mayhew, Purnsley, Brock, Graves, Boyer, Winters, Turner and Glasco, many of whom were landowners by 1870. Members of the Glasco family operated a brickyard in the Township as early as 1830. There were enough blacks in the community by the mid-1800's to warrant the establishment of the U.A.M. E. Chapel on Bucktoe Road near the New Garden Township line. Nothing remains of the very large and substantial stone building which was erected in the 1850's, but there are a few gravestones still visible in the old cemetery.


The early settlers were farmers, since the fertile soil of Kennett Township was adaptable to diversified agricultural activities. Many farmers grew produce, which they took to markets in Philadelphia and Wilmington by horse and wagon over almost impassable roads. In the mid-1800's, a group of merchants and farmers joined together to collect funds to build a turnpike from Kennett Square to Wilmington, now known as Kennett Pike. This remained a toll road until the early 1900s.


Dairying developed as an important agricultural pursuit, and after the advent of the railroad in 1859, many of the farmers hauled their milk to the creamery on East Birch Street in Kennett Square or to Rosedale or Mendenhall where it was loaded on the train for Philadelphia.


A significant step in the agricultural progress of the community was the forging of the first iron plow in Pennsylvania by Bernard Wiley in a blacksmith shop on Bayard Road in 1810. Blacksmiths, necessary in any economy depending upon horse-drawn transportation, were frequently wheelwrights as well.


A necessary adjunct of clearing the land for agriculture and building homes was the saw mill for production of lumber and the grist mill for grinding of flour for human consumption and to feed livestock. These mills were water powered and located along the streams. The first recorded grist mill in the Township was built on the Red Clay Creek in 1689. The exact location of the mill and the name of its operator are not clear. However, it is known that John Marshall operated a saw and flour mill along the Red Clay Creek in 1763 at a farm known as "Marshallvale." In 1856, Thomas S Marshall converted this mill to a paper mill which was the forerunner of the present National Vulcanized Fiber Company (NVF), still an important industry in Kennett Square and across the state line in Yorklyn, Delaware. The grist mill known as Clifton Mills, south of Kennett Square, began in 1770 and remained in continuous operation until the 1930's.


In addition to supporting a profitable agricultural community, the national resources of the Township provided clay for bricks, lime for mortar and fertilizer, and hornblende for building stone. This black building stone, found nowhere else, was used extensively for construction in the early days. Limestone was quarried from about 1850 to 1910 from at least two quarries in the area.


A new venture in specialized agriculture began in Kennett Township about 1895, when several residents began growing flowers and vegetables under glass. Greenhouses appeared throughout the Township, some of which have survived and are still active today, growing principally roses and carnations

The specialty which was to make Chester County world renowned began about 1885, when William Swayne, a successful florist in Kennett Square, conceived the idea of growing mushrooms beneath his greenhouse benches. He sent to England for spawn, and the results were sufficiently encouraging to make him decide that a separate building would make it possible to control the growing conditions for mushroom culture. He built the first mushroom house in the area, and his son, J. Bancroft Swayne, returning from college, took over the mushroom business and made it a commercial success, eventually developing a spawn plant and a cannery in addition to the growing houses. Encouraged by the Swayne success, and the attractive price of mushrooms in city markets, others began the production of mushrooms as their principal occupation.


There is record of two early private schools in the Township, one, conducted by Rebecca Gillingham in her father's home known as "The Pines," and the other under the care of Kennett Friends Meeting, which was located in the triangle between Schoolhouse Road and U.S. Route 1. Most of the one-room public schools in the Township were converted to dwellings after they were closed following the building of the Kennett Consolidated School in 1931.


Of the three post offices which have existed over the years in the Township, only one remains. The Hamorton office was closed soon after 1900, Norway changed to Rosedale about 1910 and was closed in 1967, leaving only the office at Mendenhall still functioning.


Among the well-known landmarks in Kennett Township was Woodward's Boarding House, a large three-story summer resort with a sweeping veranda. Built in 1899 on Hillendale Road about one mile south of Rosedale, its 40 rooms welcomed guests arriving by train from Philadelphia, New York City, and Wilmington, who were taken by horse-drawn carriage from the Rosedale station to the Boarding House. Guests enjoyed playing croquet and shuffleboard, dances, walks in the country, and entertainment with area residents until the end of World War II when rail passenger service to the area was terminated. Woodward's Pine Hill Fruit Farm provided most of the fresh fare for the table. The Boarding House was destroyed by arson, July 27, 1961.


The disappearance of passenger train service to Kennett Township about 1947, and the end of the trolley service, which operated from 1900 until the late 1920's, left the area totally dependent on the automobile and occasional buses that operated locally and infrequently to Philadelphia and Washington.


Most of the early settlers were members of the Society of Friends (Quakers). When they first arrived in Kennett Township, they had to cross the Brandywine to attend New Ark Meeting in Brandywine Hundred. Because fording the Brandywine was impossible at some seasons of the year, Old Kennett Meetinghouse was built in 1710, enlarged in 1719, and again in 1731.


The meeting house, now listed on the National Historic Register, with its well-kept burying ground, is located east of Hamorton at the entrance to Kendal-at-Longwood and is open for worship in the summer. Hamorton, an important crossroads commercial center in the early and mid-19th century, was listed in the National Register of Historic Places in April, 1990.


The Longwood Meeting House, located behind the Longwood Fire Hall along Route 1, was established prior to 1850 by a group of Progressive Friends concerned with the abolition of slavery. The House was dedicated in 1855 and provided a platform for many of the most radical speakers of the day on abolition, temperance, single tax and equal rights for women. The renowned author and editor, Bayard Taylor, is buried in the cemetery adjacent to the Longwood Meeting House. This building is now a tourist information center.


Longwood Gardens, known for its flowers, colored fountains, greenhouses and gardens, has been placed on the National Register of Historic Sites. The Longwood tract, of which there are over three hundred acres located in Kennett Township, dates back to 1700 as an original land charter from William Penn. Longwood was formerly called "Peirce's Park" after George Peirce, its founder, who established the magnificent grove of trees.


The heritage of Kennett Township's long history is too rich to be forgotten. Many of the people and places have undergone significant changes through more than three centuries of recorded history, but the Township is now, as it was in its earliest days, a pleasant and rewarding place to live. It is the responsibility of all the citizens who enjoy the benefits of living in the township and who profit from the energy and initiative of its early settlers, to preserve for future generations the resources and heritage which Kennett Township has received from the past.